Is “This Is The End” The End Of Comedy As We Know It? 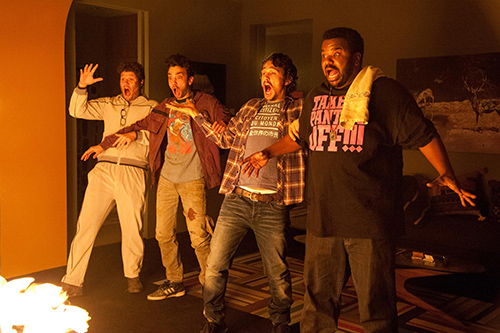 I went to see the new comedy This Is The End because I was hearing that it was all that.

As a story or film experience it was good, but for me, far from great. However, in terms of pushing the Comedy Film envelope, it most certainly did. Without giving away the plot (not that you could give away what the title This Is The End doesn’t already give away) it’s safe to say the two-hour film had something for everyone—if everyone is a social, sexual, religious deviate (which judging by the roaring laughter of the theatre audience, we are). The film features hilarious impalings, beheadings, an uncomfortable-but-funny “rapey vibe” scene involving Emma Watson and a long, dark, twisted and very well written and delivered exchange between Danny McBride and James Franco on the subject of masturbation.

Abbott and Costello’s “Who’s On First?” this is not.

Or Something About Mary.

Which is really the point I’m trying to get out. More than any other genre of film, the Comedy genre keeps evolving and pushing the envelope faster and more aggressively than any other. Thanks to the likes of Judd Apatow and his crew of freaks and geeks, Sasha Baron Cohen, Danny McBride and others, there’s no subject, no visual, no idea that’s taboo anymore. The more they push it, the more we laugh, the more tickets we buy, the more they push it. And whether we like it or not as art, we can’t argue with it as comedy—this shit is funny.

If there’s anything unfortunate, it’s that movies like “This Is The End” continue to increase our comedic resistance levels; we are now immune to the comedy effects of more classic, traditional humor. After laughing at Borat and This Is The End, it’s somehow harder to laugh at Blazing Saddles, The Jerk and Caddyshack. Charming and humorous, yes? Laugh out loud? Not so much.

This is the progress of comedy in film today. Maybe advertising can learn something here.