The Thrift Is Definitely Back

After releasing our first music videos announcing “The Thrift Is Back” in the Hostess aisle at Big Lots!, we can’t believe we already have “frequently asked questions” to address.  But we do. So, we will.

Q. “What was the inspiration for the song?”

A. From our first conference call with client, we were struck by how funny it was to hear the CMO of a major company earnestly saying words like, “Ding Dong, “ “Ho-Ho,” and “Twinkie.”  We realized right then that the magic would be in making the Hostess products the stars of the show.  A song seemed a natural way to celebrate those hilarious, nonsensical words, so we looked to other memorable, made-up-word songs for reference.  We had a ball going back through the archives of, “Da Doo Doo Doo Da Da Da Da” “Ob-La-Di, Ob-La-Da” “Do Wah Diddy Diddy,” and “Papa Oom Mow Mow.” We then kicked the idea over to one of our strategic partners (See: OKRP Principle #3) Beacon Street Studios, and they turned it into some audio magic.

Q. “How did you find the dancing women?”

A.  Big Lots! target audience is a woman they call “Jennifer” –she’s a smart, savvy shopper who loves to have fun.  We saw an opportunity to cast multiple “Jennifers” having a blast in their natural habitat. 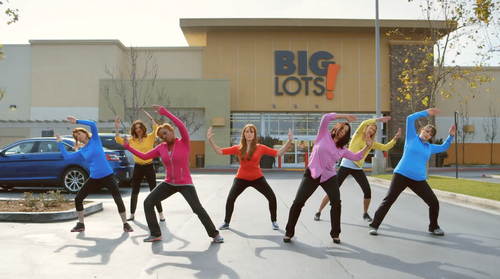 A.  We considered multiple approaches on this one (Should we have our Jennifers busting moves in a momivan?) but really were inspired by the clear vision of our director, Jeff Jenkins, to make this a synchronized, straight-to-camera, dance performance piece.  We ended up loving the fact that our Jennifers were not professional dancers but rather a great cross-section of moms, wives, sisters and friends making the choreography all their own. We had a lot of fun playing into the seriousness of their performance by putting them in “uniforms” – black pants with brightly colored yoga tops or work shirts.  Our CCO, Matt Reinhard, has taken to calling them the “Kaleidoscope 7.”

Now, on to the “Twinkie Time” video:

A. The core of that team is a group called FND Films.  We’ve worked with them since Day 1 (In fact, they did the Day 1 video that’s on our site) and trust them to always bring fast, funny ideas to life in their typical run ‘n gun, shoot-now-ask-questions-later fashion.  The other talent in that car came straight outta Hollywood.

A.  Mostly, that’s where they landed because they had less than 24 hours to hit us with their take on our concept:  “fun song with Hostess product names.”  Necessity being the mother of invention, they opted to go without their bagpipes on this one. 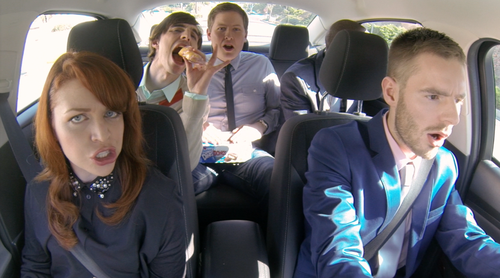 A.   No.  And now I get the feeling this is not a real person asking these questions. We’ll wrap it up here.

Thanks so much to all of the amazingly talented people who helped us create and deliver our first two pieces for Big Lots!  And a huge “thank you” to Andy the entire Big Lots! team for being such great partners.